I’ve been spending a lot of quality time in collections storage lately and have noticed something curious: an abundance of pink! Namely, ancient pink pigment. Why is this so interesting? Because the pink most frequently used in the ancient Mediterranean was made of madder root, a plant-based dye that was used to color textiles as well as a pigment on objects.

Like other organic pigments, rose madder is highly light sensitive and prone to fading. The occurrence of rose madder on so many artifacts in the collection surprises me, given what we know about its fugitive nature. Rose madder also has a unique chemical property that causes it to luminesce, or glow, an orange-pink color when exposed to ultraviolet light. A quick look with a UV LED flashlight can help confirm whether or not the pink on an object is madder. 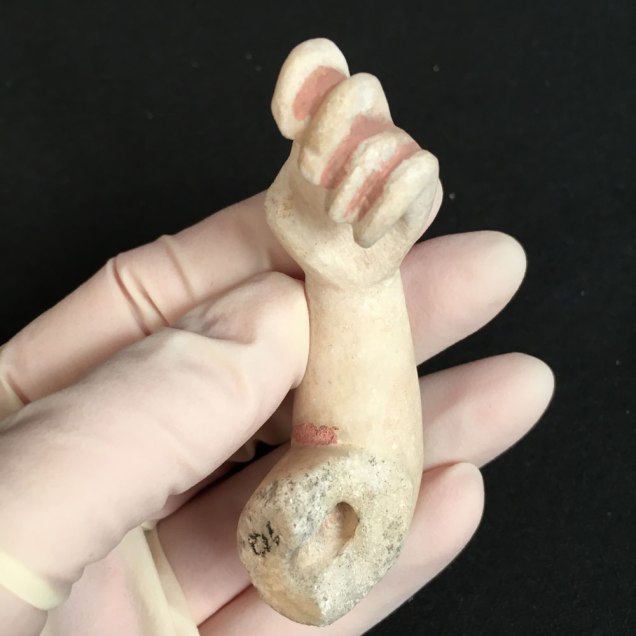 Marble sculpture fragment KM 1931.441 from Seleucia with pink pigment between fingers and inside elbow.

Despite its tendency to fade, I am finding pink on everything from terracotta figurines to marble sculpture to limestone grave markers. I’m also finding it in different hues and on different decorative elements, from flesh tones to jewelry to architecture.  It turns out pink is everywhere at the Kelsey, and it is pretty fascinating.

This month’s Ugly Object takes the cake for being both incredibly interesting and really, really ugly. What exactly is this rather scraggly looking textile fragment? We’re not entirely sure, although its report suggests that it might have once been part of a cap.

This bit of cap — discovered at Karanis, Egypt — was made using a technique called sprang or nålebinding, an ancient precursor to knitting in which loops of yarn are interlinked using a single needle. Are you a yarn enthusiast or experimental archaeologist and want to try the technique for yourself? Check out Suzanne’s 2016 blog post about an ugly sprang sock, which features links to pages detailing how to knit/link your own ancient sock.

There are other cool things about this sprang fragment, one being its color. We suspect it could be an organic red dye, although analysis would be needed to confirm this. Rose madder, a red colorant derived from the processed roots of the madder plant, was used frequently as a pigment in Roman Egypt and might have been used to color our cap frag. Another cool thing is the black overcast stitches that run along one edge. These could very well be part of the cap’s original construction, or perhaps an ancient repair.

This and other less frequently seen Karanis textiles will be on display in the upcoming Kelsey exhibition Ancient Color, opening February 8, which explores the sources, uses, and scientific investigation of color in the Roman world.

This week a team from the Detroit Institute of Arts conservation department traveled to the Kelsey to take a closer look at one of our Fayum mummy portraits. The portrait is normally on display in the Dynastic Egypt gallery and is dated to the Roman period of Egypt (79–110 AD). The woman featured in the portrait is clearly of means, as her gold earrings and necklace, colorful gems, and purple robe indicate. We were curious to learn more about the colorants that were used to paint her portrait and to look for painting details that have become harder to see over time.

Christina Bisulca, conservation scientist at the DIA, brought along a portable spectrometer to identify pigments on the painting. She found evidence of pigment mixtures in multiple areas of the portrait, including the flesh tones, the oval gem at the center of the woman’s pendant, and the drapery of the robe. It appears that the various shades of purple in the robe were likely created by mixing and laying blue and red pigments and dyes, for example. Further analysis is needed to verify these results.

Aaron Steele, the DIA conservation department’s imaging specialist, brought along their powerful infrared camera to see if underdrawing might have been used to sketch the sitter before paint was applied. Although underdrawing was not immediately visible, details of curls along the hairline and sectioning of the woman’s hair could be seen in the infrared images. Details of paint application next to the woman’s face are also much more visible in the infrared. I also had the chance to capture ultraviolet images and produce infrared false color images which provide good information on the distribution of certain pigments (including rose madder and Egyptian blue) over the surface.

We look forward to learning more about the Fayum portrait over the next year and to featuring the results in an upcoming Kelsey exhibition about color in the Roman world. Many thanks to our friends at the Detroit Institute of Arts for their support of this project! 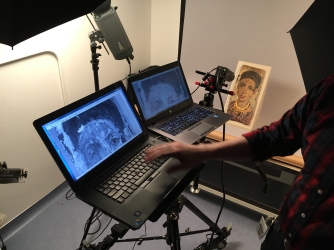 Examining the portrait with an infrared camera

Analyzing the portrait with a FORS spectrometer

April’s Ugly Object isn’t an object per se. It’s a specimen — a shell — and it was excavated at Karanis during the 1924–25 field season. It’s rather small and unprepossessing. But to me this shell is a thing of beauty. Why? It is a murex shell, and was once the likely carrier of shellfish purple (or Tyrian purple), one of the most valuable dyes in antiquity. Pliny wrote at length of the Roman passion for purple, and described in detail the extraction and processing of the color from a gland found in the throat of the snail. The dye produced a range of purples from magenta to purple-black. One can imagine the vast numbers of snails that would have been needed for a dye vat large enough to color the yards and yards of textile used in the elite fashion industry of Rome. Pliny cites an observation by the 1st-century BC biographer Cornelius Nepos that a pound of dye would have sold for 100 denarii — about half of the annual salary of a professional soldier. This was some seriously valuable stuff.

Tyrian purple, like many other natural colorants, has now been chemically synthesized. We can buy a shirt or sweater in purple or any other color today at very little expense, which makes it hard to relate to the craze that drove people to seek out the murex snail on Mediterranean beaches. I can’t think of a color today that screams “bling” the way purple did in the ancient Roman world. Can you?

You can spot the murex shell in the Graeco-Roman Egyptian galleries on the first floor of the Kelsey’s Upjohn wing.

References to the text of Pliny the Elder, The Natural History (Historia Naturalis) Book IX, Chapter 63 are from a translation by John Bostock, M.D.  London: George Bell and Sons, Covent Garden. 1890.