Every summer, members of the Kelsey Museum community travel to Italy to participate in a number of projects. Many excavate at the site of Gabii (one of three sites currently featured in the exhibition Urban Biographies). Some work for the American Academy in Rome. A few work at Sant’Omobono. Some students do all of these things, all while doing their own research.

For many students, their first time visiting Rome must include some of the highlights, including seeing the Coliseum. This structure has been a destination for tourists and scholars for a long time — long before tourism was big business. Back in the 1800s, traveling was expensive and tedious and took a long time. There were no planes, so getting to Europe from the United States required a long voyage by ship. In addition, not many people had the funds to engage in long-distance travel. For these reasons, tourism did not happen on the scale it does today.

For this month’s “From the Archives,” we present a photograph showing the Coliseum as it looked back in 1885. Images such as this one were taken by professional photographers who would package several photographs together and sell them to schools or scholars or churches. They’d come in series, such as “View of Rome” and “View of the Holy Land/Palestine” and “Views of Greece.” People bought these photographic souvenirs in order to show their students, congregation members, and friends back home what Europe looked like.

However, the image of the Coliseum depicted on the obverse (front) is not the focus for this month’s post. Instead, we flip the image over to discover the following:

Here we have a handwritten note from Francis W. Kelsey himself, namesake of the Kelsey Museum. Not only is Kelsey sharing his comments and thoughts about this image and the Coliseum itself, but he is also giving us vital information. To people who work in archives, learning a particular person’s handwriting is a big key in deciphering other archival materials. Here, we see and can now learn to recognize Kelsey’s penmanship (though it does change as Kelsey ages). Now whenever we find unattributed notes in the archives, we can compare them to this signed note. If they match, we can safely say it is Kelsey’s note we found. And from that, we can start piecing together dates, context, and perhaps even the people being discussed.

Kelsey likely did not think of this as he made this annotation on the back of this photograph. To him, this was just a good location to make a note that would be useful to others. His concern was more for the scholarly aspect of the note rather than the archival one.

Archivists are routinely making discoveries when working in the archives, and they get to know the people captured in those archives. From their notes, we know what kind of workers they were, where they vacationed, about their relationships with family and colleagues, and their general thoughts about the world. Deciphering someone’s handwriting is a big tool for us, as it helps us piece together the archives and, often, people’s lives. We learn so much more about them from the tiny little memories they left than they ever could have imagined. 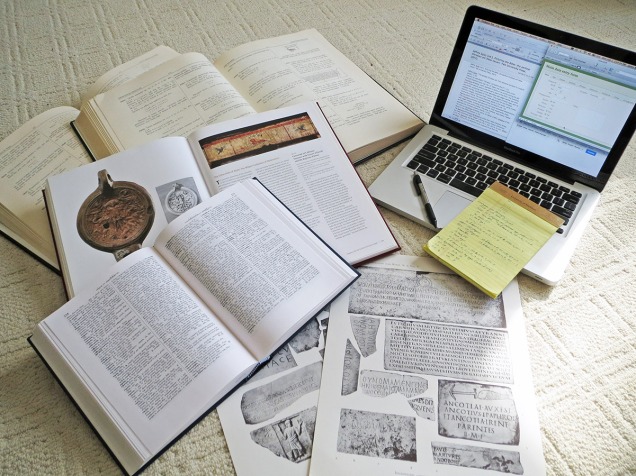 When I teach my students about archaeology, I find that many of them have vague ideas about what archaeologists do. This is especially true for those parts of archaeology that do not take place in the trenches: the reading, writing, thoughtful discussions, and detective work that happen elsewhere. Some archaeologists (myself included) do the majority of their work in paper and ink rather than dirt and potsherds, and this side of archaeology is its own sort of adventure.

I began a new phase in my adventure this year: my dissertation. Right now I am preparing for what I hope will be several months of research abroad in the fall, split between Naples and Rome. My work deals with catacombs (underground cemeteries) in the major cities of late antique Italy, particularly the economic systems that helped produce these complex sites and the artifacts in them. While in Italy, I will spend my time examining archives, museum collections, and catacomb sites, but before I go, I need to build a good foundation for my research. So for now, I am reading about the sites I will visit, collecting inscriptions and other texts that tell parts of the catacombs’ story, and designing ways to organize and analyze the data I will gather. It may seem like slow going now, but all of this will help me make the most of my time in the field.

When it comes to the Kelsey Museum of Archaeology’s collections, not all artifacts are created equal. Some call out to us intellectually, others emotionally. To that end, we asked our curators to name their favorite Kelsey artifact or object. Here is the second in a series of seven.

BY SUZANNE DAVIS, Associate Curator and Head of Conservation, Kelsey Museum of Archaeology, University of Michigan

Why. “I like this little guy because he is the perfect pocket-sized man. If you visit him in person, you can see how the figurine is curved due to his funny posture. As a conservator, I’ve never been particularly attracted to the metal objects I’ve worked on, with the exception of this one. He is the cutest copper alloy ever!”

About Artifact. This statuette of a young man most likely was made in the sanctuary of an Etruscan god and purchased there by a worshiper to dedicate to the deity. It may have represented the worshipper symbolically and, when left at the sanctuary, reminded the deity of his continual devotion.

The kouros type originated in the Greek world, but this Etruscan statuette differs from its Greek models. The tautness of the youth’s pose, the strongly arched back, and the large head with its lively facial expression lends the figure an aura of energy characteristic of the art of Archaic Etruria.

Background. From the Villanovan Iron Age, the Archaic Period (ca. 900-480 BC), the Etruscans developed a distinctive visual culture that drew upon indigenous traditions and contemporary artistic trends represented by imported objects, especially in those from the ancient Near East, Egypt, and Greece.

Find It. On the first floor in an exhibit case that backs up to the window, opposite the ancient Greek case, in the William E. Upjohn Exhibit Wing of the Kelsey Museum of Archaeology.