This September, researchers from the University of Lecce (Italy) working at the site of Dimé (Soknopaiou Nesos) in Egypt visited the Kelsey Museum. Professor Paola Davoli and team (Bruno Bazzani, Stefania Alfarano, Clementina Caputo) returned to work with the collections from Michigan’s excavations at Dimé in 1931. On this visit, the researchers spent two weeks measuring, drawing, photographing, and studying artifacts from the site. They looked at furniture, beads, sandals, lithics, sculpture, figurines, and a number of other artifact types.

This was the team’s second time in Ann Arbor to work with materials from Dimé. In 2017, Davoli and team visited the Kelsey to look through the archival materials from the excavation. This includes maps, drawings, photographs, and other files that help the current Dimé project better understand work undertaken at the site previously. At that time, Professor Arthur Verhoogt hired two Michigan undergraduates, Bianca Gallina and Josiah Olah, to digitize the Dimé archives to assist the Lecce team’s work. Bianca and Josiah helped the Kelsey organize, identify, catalog, and digitize a great number of items from the archives, which will prove to be beneficial for years to come.

For this month’s “From the Archives,” we present a taste of the work Bianca and Josiah accomplished. Like in Karanis, the Dimé excavation team took detailed notes of the architecture at the site, noting topographic measurements. While there were many drawings made, we present those of an oven found at the site, in house I 107. Ovens were not rare at the sites, but not every home had one. With these drawings, we learn the basic construction of a Roman-era Egyptian oven, its size, and potential uses. We also see the handiwork of the person who, in 1931, drew this for their own research and also for those who followed.

Though Michigan’s excavation at Dimé occurred back in 1931, the work still has plenty to inform research today. The Dimé team from Lecce continues to mine the Kelsey archives for information, and plenty of other researchers will use this material for other projects. We don’t know yet what those requests will look like, so we do our best to protect this collection and make it accessible to all who want to use it. 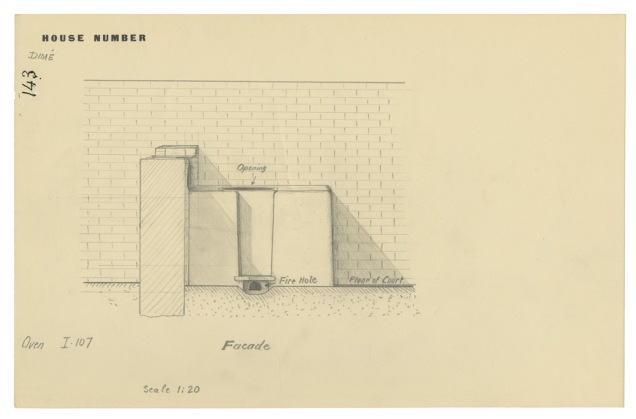 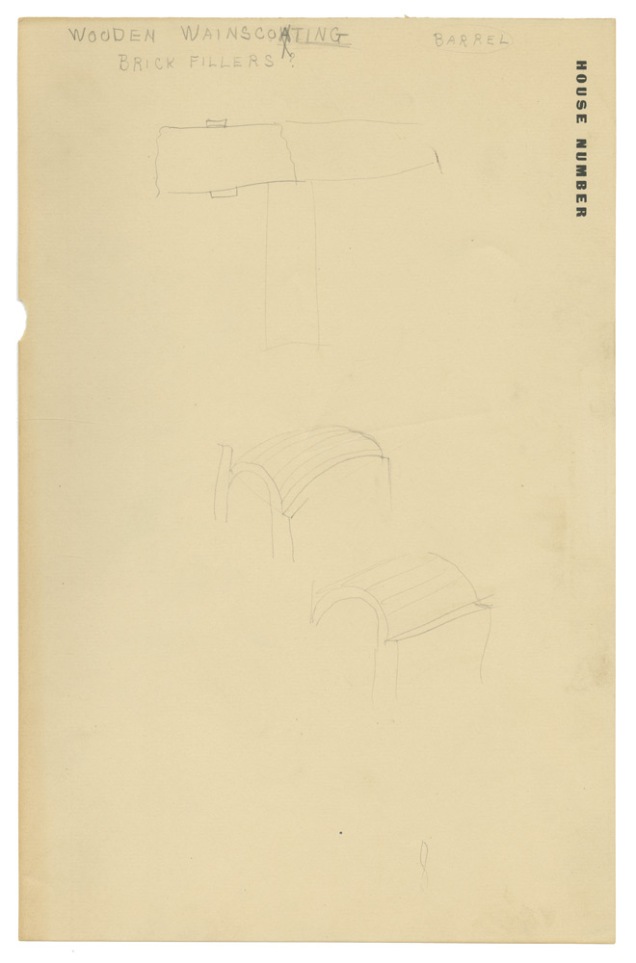 Archaeologists are using this tool more and more on their excavations, and even the Kelsey Museum has gone fully digital. The Kelsey used to insist on film photography when documenting its collections, but greater access to storage space and proper archival methods for digital photography has paved the way for this change.

The same option was not available, obviously, to those who came before us. George R. Swain, University of Michigan photographer from 1913 to 1947, had to use the methods available to him at the time. This meant taking his wood view camera with him on his travels through the Mediterranean, along with hundreds of glass plates. These plates were heavy, and he often needed help carrying them (often his son provided this service).

His view camera was not Swain’s only tool in the field. In the 1920s, easier means of photography were available, though they were of lesser quality. Thanks to the innovations of George Eastman, film photography had become popular. Film rolls were small and easy to carry, but one was limited by the number of frames on each roll, and the photographer couldn’t see what they captured until later, when the film was developed. Swain carried a film camera, likely a Kodak (the model is lost to us), and often he had others do the same. He would take meticulous notes about who shot what, when, and where. These notes are reflected in our current records.

The Kodak shots often captured scenes that are less formal but equally as important. The glass slides were reserved for artifacts and excavations; the Kodak captured everything else, including people, humorous moments, animals, and anything else happening during the excavations and travels.

For this month’s “From the Archives,” we present one roll of Swain’s film that reflects this. In April 1920, only 98 years ago, Swain and company traveled to Dimé, in the Fayum region of Egypt, likely on a reconnaissance mission to see where Michigan could excavate in years to come. Dimé was eventually excavated, but was not one of the original projects of the 1924 season. In this roll, we see what Swain encountered during this trip. People holding fish. The train and the train station. Farmers working the fields. A village scene. Dr. Askren posing. Hiking over the sands.

Fortunately for us, making this kind of trip is easier now without having to haul so much photography equipment (though we are lost without an energy source). Swain did not have the luxury, but we are thankful for the work he did to capture these moments. 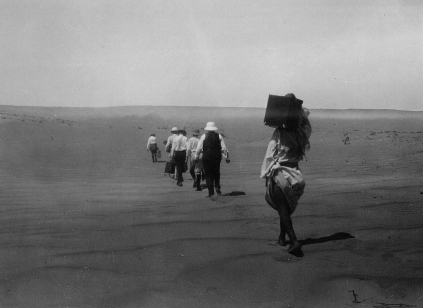 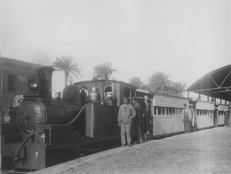 Through the Undergraduate Research Opportunity Program (UROP) we each joined Professor Arthur Verhoogt’s research project in the fall of 2016. We were interested in the documentation of an excavation at Dimé, Egypt, that lasted only a single field season, from 1931 to 1932. Because current archaeologists are revisiting this site, our goal has been to digitize the Dimé material such as field notes, triangulation points, and maps both hand drawn and printed. After we exhausted materials at the Bentley Historical Library we contacted the Kelsey Museum for assistance. With immense help from Museum Collections Manager Sebastián Encina, we began continuing our research with the Kelsey’s archives. Since then our project has continually been aided by the Kelsey Museum from both their staff and the materials made available to us. The materials we have been digitizing from the Kelsey will be shared with and examined by the archaeologists who have been excavating Dimé recently and will be used as a tool to further their research as well.

Sebastián Encina has assisted us repeatedly in our research with the Kelsey archives. He assisted us in not only the digitization of these maps and documents, but has also helped us obtain valuable experience in how to research efficiently and effectively. Through our research at the Kelsey each of us now has a far greater understanding in scanning documents to TIF files for dense pixel quality, the process of adding and amending metadata to digitized documents, using Photoshop, moving material into a database format, and improving the methods we used in researching these documents.

Aside from the many new archival research skills we acquired, we also were introduced to much of the Kelsey museum staff as well as the Clark Library staff after visiting the map library to scan the largest maps we found. The museum resources we have been able to utilize, including people and technology, have allowed for complete student engagement and a unique opportunity to further our research in this area. With the help of the Kelsey’s resources we created a poster presentation for the UROP symposium and also presented our research during the Department of Classical Studies Research Symposium. The work we have done so far at the Kelsey has been a wonderful opportunity to further our academic experiences on a professional level.

We are extremely thankful for all that the Kelsey has provided to us and added in our research project. We strongly recommend future students to contact the Kelsey and if possible utilize its vast resources to improve their own research and to gain truly unique and valuable experience in the museum’s fields of study. Each of our first years at the University of Michigan have been fantastic academic experience made in a large part by the Kelsey Museum.

Around the world, the Kelsey Museum is known as the home for the excavations at Karanis, which the University of Michigan conducted between 1924 and 1935. The collections and archives from this expedition continue to fascinate us, and they provide a wealth of information we continue to revisit through many projects. Scholars from everywhere look to the collections, both artifacts and archives, to further research and our understanding of Egypt under Roman power. Here in Ann Arbor, the collections play an important role with classes and exhibitions.

When Francis Kelsey was finding funding for the Karanis expedition, he was actually initiating a fund to excavate at multiple locations. In 1924, U-M went to Karanis, as well as Antioch and Carthage. These latter two sites turned out to have single-season excavations, as the focus was placed on Karanis due to its rich artifact and papyrological finds. U-M stayed there through 1935, when finally excavations were completed. However, the team did not excavate only at Karanis during this time, as they ventured to other sites while in Egypt. In 1931, the team went to Soknapaiou Nesos (Dimé), and in 1935 they excavated at Terenouthis. Each of these also turned out to be a single-season excavation due to a number of reasons.

Since 1931, the Kelsey has still housed the archives and artifacts from Dimé. Not nearly as plentiful as Karanis, it still provides a wealth of information for archaeologists working at Dimé today. These archives were deposited within the papers of the Karanis Expeditions, not even separated into their own collections. Because of the tremendous attention paid to Karanis, the Dime archives are not as often studied.

Over the past academic year, Classics professor Arthur Verhoogt made an effort to focus on Dimé again. Prof. Verhoogt worked with two UROP students, Bianca Gallina and Josiah Olah, to revisit this collection, study what they could within the Kelsey as well as Bentley Historical Library. The two students scoured the letters, papers, drawings, and maps, and made note of what they found that would be useful to researchers.

For this month’s From the Archives, we present some of the items they digitized. Much like Karanis, the excavations at Dime resulted in some impressive maps. These will likely look familiar to some readers, as the style and look of these maps are similar to those from Karanis. The maps include triangulation points, cross sections, and overview of the excavation site. Having these on hand will assist us in understanding the work carried out at Dime nearly 90 years ago. This is even more important to our colleagues who continue working at the site. This Spring term, the students will continue digitizing more archival materials, including house drawings. In Autumn, the Dime excavators will visit Ann Arbor to further research the materials housed here. By then, we hope to have everything digitized to provide even greater access.

A selection of maps from the UM excavations at Soknopaiou Nesos (Dime). 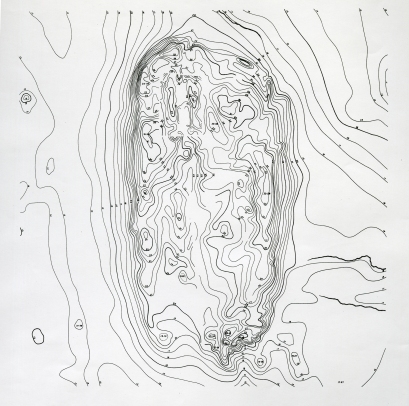 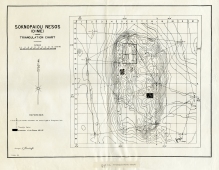